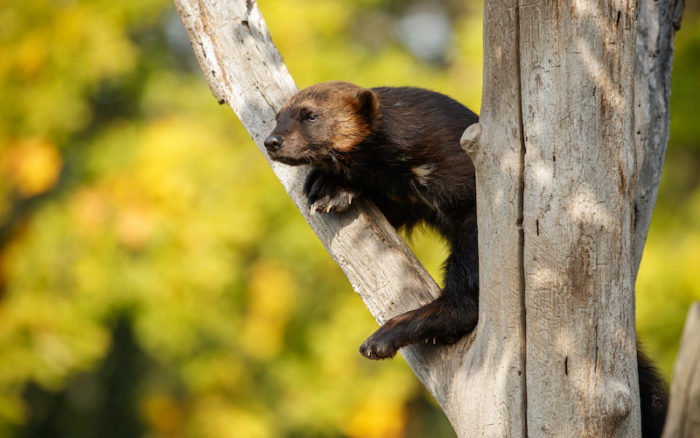 What’s The Difference Between A Wolf And A Wolverine

If you have watched several National Graphic movies, chances are that you have seen the wolf,  wolverine, or both. If you check these animals closely, you might be forgiven to think that they are the same. However, they are totally different in a number of ways. In fact, these animals only have a few similarities and a plethora of differences between them.

To start with, these animals are both carnivorous mammals and are the largest of their individual families. Besides this, they can live in areas that experience extremely cold temperatures, thanks to the fur that covers their bodies. Since we have looked at the similarities between these two animals, time is ripe for you to know what sets them apart. In this article, we shall take a closer look at both animals for a better understanding.

What is a Wolf?

The above-mentioned animal is a wild carnivorous mammal. As far as its classification is concerned, you will note that it belongs to the Canidae family. Like we mentioned above, this animal is the largest in the Canidae family. When it comes to weight, this mammal can weigh up to 175 pounds. Unlike other mammals, it can either be black, reddish, gray, tan, or even reddish in color.

Since the wolf is a social animal, you are likely to find it in family groups commonly known as packs. When it comes to the hieratical order, these mammals are generally strict. You will note that the father or the mother can head the family of these animals. Technically, every pack normally has about 7 to 8 animals. However, there are instances when the pack can have as many as 20 wolves.

What is a Wolverine?

A wolverine is basically a dark brown that resembles a bear and has shaggy fur. As far as its classification is concerned, this animal belongs to the Weasel family. Since it looks like a bear and a wolf, the animal mentioned above is mostly thought to belong to the same family as the wolf. However, from what we have illustrated above, they belong to different families.

Just like the wolf, the wolverine is the largest among its family. This animal is commonly known as a skunk bear, glutton, and looks like a small bear. However, it is a very fierce animal and is known to be ferocious. In fact, the size of this animal is not proportional to its strength. It can prey on bigger animals that are double its size. This characteristic sets it apart from other carnivorous mammals.

Since these animals live in areas that have cold temperatures, it has a number of adaptations. One of them is having plenty of fur on its body. This way, it can retain its warmth for longer periods, even during the cold season. Besides this, the animal is quite muscular and stocky. Therefore, it can navigate through deep snow without getting fatigued. Its legs are short and have large toe paws that enable it to capture and tear prey with ease.

Apart from this, the wolverine has large teeth and powerful jaws that enable it to crush bones seamlessly. In fact, it is capable of cutting frozen mean using its teeth. As far as its hunting speed is concerned, this animal is generally slow. Therefore, it does not chase its prey for long distances. In most cases, it will allow fast animals to hunt and then pounce on the prey once it has been hunted and killed. Since they are good at climbing trees, they can easily hide there and wait for other predators to make a kill and then pounce on the prey.

It is important to note that these animals are territorial. Therefore, they are known to defend their territories fiercely. To keep its enemies at bay, this animal produces a pungent smell through its anus. This way, other animals cannot encroach its territory. Finally, these animals are predominant in the remote areas of the alpine tundra and subarctic in the Northern hemisphere. It can also be found in Alaska, Siberia, Canada, and Western Russia.

Main Differences Between the Wolf and the Wolverine

Although the above-mentioned mammals are carnivorous in nature, there are many differences that set them apart. Here are a number of aspects that distinguish these two animals:

1. Ability to live in groups

Like we mentioned above, the wolf tends to live in families commonly known as packs. However, wolverines are different as they live in segregation.

Wolves are known to be fast when it comes to hunting speeds. However, the wolverine is different as it is slow. Generally, it waits for other predators to hunt prey, and then it pounces on it after the predator has left.

These animals also differ when it comes to their body structures. Wolves technically have a long body structure while their counterpart has a stockier body.

The gestation period of a wolverine is about 30-50 days, while that of a female wolf is between 62 to 65 days.

8. Regions where each animal live

The wolf is predominant in North Africa, North America, and Eurasia, while its counterpart is more prevalent in regions such as Siberia, Alaska, Mongolia, and Scandinavia.

From how these animals live to the regions where each animal is found, there are many differences between wolf and wolverine. Therefore, these animals are different in many ways. Note these differences today, and you will not have a difficult time distinguishing these two carnivorous mammals.