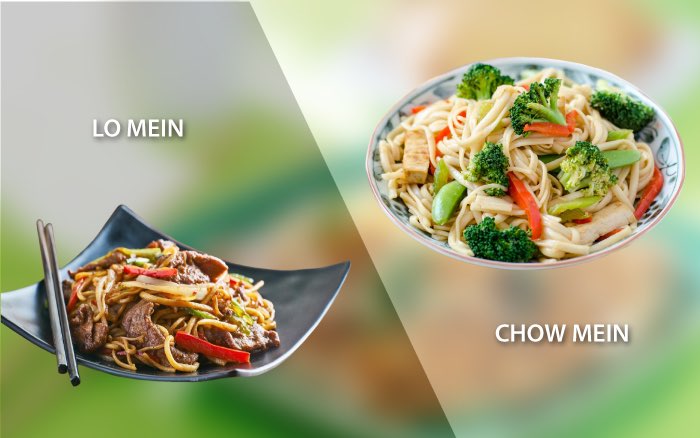 What is The Difference Between Lo Mein and Chow Mein

Have you ever found yourself confusing Chow Mein for lo Mein and vice versa? Or have you ever thought that the two dishes mean the same because of the similarity in the name “Mein”? Well! It can be quite challenging to get the difference between chow Mein and lo Mein. Most especially if you are new to these two dishes, you may not know the variances. Most people think that the difference falls in the type of noodles used to prepare these dishes. This is simply because chow Mein noodles are crispy while lo Mein dishes are soft. This is yet not true because the main difference lies in their method of preparation.

So, are you planning on trying out one of these recipes at home? Or you are avoiding confusion on your next order? Well, this article is going to articulate the detailed differences between the two. Get ready to read it till the end.

Can you tell the difference if you saw the two Chinese noodle dishes? Breaking down the difference is quite confusing. Most people use the terms of these dishes interchangeably which makes it more complicated. They refer to chow Mein as lo Mein and vice versa. Most restaurants do not put many considerations in their naming settlements. After all, they all tend to look similar. It’s thus difficult to pick the differences but let’s dig deeper.

What’s the Difference Between Chow Mein and Lo Mein?

Mein is the Chinese word used to refer to noodles. You can also use Mien in place of mean and you pronounce the words as “me-an”.  The preparation of both dishes uses the same type of noodles from Chinese culture. These noodles are normally made from eggs and wheat flour. In fact, they have a lot of similarities to Italian pasta.

If you live near a Chinese grocer, you will most likely find noodles. They are normally sold as either the chow Mein noodles or as lo Mein noodles. If you lack any of these, you can as well use the normal spaghetti or linguine noodles in their place. The only thing you will miss out on is the egg ingredients packed with the Chinese noodles. So, you can tell what brings the difference between the two can be the eggs.

So, if the difference is not in the type of noodle used as most people assume, what really is their difference? Let’s discuss the meaning of each dish to get a clearer difference. Read below for more information.

Chow Mein is the Chinese word for fried. So, we are simply referring to this dish as fried noodles. Chow Mein dish is further divided into these two groups that we discuss below.

It can be confusing to identify the chow Mein when served. This is the only one you can notice chow, Mein.

Lo is the Chinese word used for noodles. Lo means tossed. Thus, the full meaning of lo Mein is simply “tossed noodles”. A lo Mein dish has the following characteristics;

What type of noodles to use?

Chow Mein and lo Mein are both prepared using Chinese noodles made with wheat flour and eggs. The best for lo Mein is the fresh ones while the Chow Mein can be either from dry or fresh egg noodles. You can use Italian pasta like linguini or fettuccini if you fail to get these Chinese egg noodles.

The difference in their preparation

It’s important to note that the preparation of noodles varies from one region to another. Also, this can be from one restaurant to another. Below is a simplified description of how they are both prepared.

Both lo Mein and chow Mein are mostly prepared using soy sauce. There are other places where chow Mein preparation is by the traveler use of a creamy sauce. Read below to know their preparation methods. This may help you get the difference confusion off you.

Concluding on the best noodle will simply depend on your liking and taste. Lo Mein noodles are soft and have more sauce in them. You can get the best from chow Mein noodles if you add things like celery, juicy tomatoes, or soft mushrooms.

Taste preferences basically differ from one person to another.

Chow Mein noodles are high in their fat content since they are either deep-fried or star fried. Their nutritional difference depends on the type of sauce added to each. Some restaurants have sweeter and heavy sauces with fat content. This is different across the restaurants.

Lo Mein sauces are thicker than chow Mein noodle sauces. This means that it has more corn starch or has other thickening agents added.

Lo Mein noodles have more veggies and protein added while Chow Mein has less of these. This keeps their crunchy texture.

Lo Mein and chow Mein; below are their simplified differences.

Between the two, which is healthier?

The difference in the taste of these noodles differs from one person to another. None is better in taste compared to the other. However, Chow Mein is crispy while lo Mein is soft.

Is their taste similar?

The taste between chow Mein and lo Mein is different. Lo Mein has a soft texture and is stir-fried with vegetables and added proteins. Chow Mein has a crunchy texture and fried flavor thus making the difference in their taste.

Can one use spaghetti noodles instead of Chinese egg noodles?

At the beginning of the year, the preparation of these dishes shows positive promises. Long noodles symbolize longevity in one’s life. Thus, the reason for cooking these noodles in their long-form without cutting them.

It’s clear why there is confusion on the difference between these two noodle dishes. The two noodles are in different forms depending on where you are. What one region refers to as Chow Mein may be different in another region.

The most common difference between the two dishes is how you prepare them. With chow Mein is star fried while lo Mein is normally boiled. You should order after looking at the picture or enquiring from the staff about what you need. This is because different restaurants differ in how they prepare. Additionally, make sure you get what you expected especially if you are a traveler or are new to that place. Ask whether the chow Mein they offer is crunchy. This is a sure bet of you getting what you want.

What's The Difference Between Zelle And Cash App Previous post