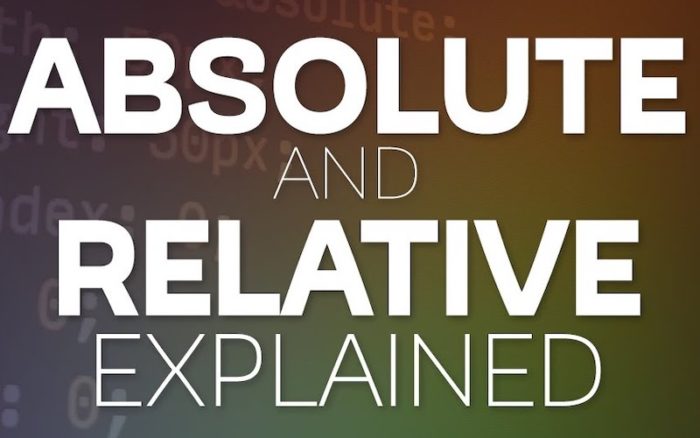 What’s The Difference Between Absolute And Relative

The words ‘absolute’ and ‘relative’ are some of the commonly used words in English. Hardly does a day pass without hearing either of these words or better still, both of them. That said, there are people who still confuse absolute for relative and vice versa. This can be detrimental as you might pass the wrong message or even cause ambiguity in an examination test.

To start with, the word ‘absolute’ means free from any sort of limitation or even condition. However, its counterpart is different as it means something that depends upon certain requirements for it to happen or take place. Generally, if something is relative, it is dependent on something else. In this article, we shall take a closer look at each term and how each can be used for a more apparent distinction.

What Does the Word Absolute Mean?

First and foremost, the word ‘absolute’ originated from the Latin words ‘absolute’ and ‘absolvere’. Simply put, it means to set free or make separate. Like we mentioned above, it means being free from any form of limitation, restriction, condition, or even qualification. Therefore, if something is absolute, it means that it is independent.

When used as an adjective, this word means final. It can also be used to describe something that cannot be modified further. In a real sense, if something is absolute, it is beyond human control. As long as you are mortal, you cannot influence something that is absolute.

This term is very common in Physics and is used to mean something that is independent of any set standards or properties. In most cases, you will find this term being used to refer to a system of units commonly known as the centimeter-gram-second system. These units are used to measure length, mass, and time respectively.

What Does the Word ‘Relative’ Mean?

Just like the word ‘absolute’, the word ‘relative’ comes from the Latin word ‘relativus’, which means relate. If something is relative, it shows that it depends on something else for it to happen. For instance, it can depend on external conditions for it to take shape or happen. In other words, if something is relative, it means that it is a dependent variable. That said, the word relative is used also means someone to who you are related by blood or marriage. A good example is your brother, your wife, your husband, your son, or even your mother. Generally, this word can be used as a noun and as an adjective.

Main Differences Between The Word ‘Absolute’ And ‘Relative’

Since we have looked at the meaning of each term, time is ripe for you to know the various differences between these words. This will make you understand these terms in a better way. These above-mentioned two words differ in the following aspects:

On the other hand, the word relative can also be used as an adjective. However, its usage differs from that of the word ‘absolute’. In this case, the word ‘relative’ indicates that something is connected to something else. Here, the item in question is not absolute or independent. When used as an adjective, it can also mean almost, comparative, approximate, or near. Here are some good examples.

Finally, as we had earlier illustrated, the word relative can be used to show someone to whom you are related by blood or marriage. Here are some examples that can help you understand:

As far as the origin of these terms is concerned, you will note that they are quite different. For instance, the word ‘absolute’ comes from the words ‘absolute’ and ‘absolvere’. However, its counterpart comes from the Latin word, ’relativus’.

It is true to say that both the words ‘absolute’ and ‘relative’ are quite different. From their meanings to how they are used, there are several differences between the two terms. However, one main difference that sets these two apart is that ‘absolute’ is independent while ‘relative’ is dependent on something. As you purpose to use any of the terms to express yourself or to illustrate something, note these differences, and you will avoid causing any form of ambiguity or confusion.